"STOP, IT'S A TRAP!!!"
"Don’t compare yourself with others. Just look at your own work to see if you have done anything to be proud of." Galatians 6:4 (ERV)

Have you ever negatively compared yourself to someone else? Have you seen people doing the same thing that you desire to do and then you get discouraged? Have you ever lost faith and stopped trying because "They" can do it better than you or have a bigger support system/platform than you? Me too. Comparison kills but it first imprisons/in-prison... The spirit of comparison is like a giant snake, it does not kill you all at once, it first wraps around you, squeezes and suffocate you until all life is gone. Many people will live a life of fear, torment, disappointment, discouragement and anxiety due to the way that they are (and some believe that they are) being judged through the eyes of other people. Many people will also live a life fighting with themselves- against themselves. A person who spends time stressing over being like (a duplicate of) someone else is a person who wastes time undervaluing themselves. Trying to be like someone else is the same as a person yelling to the creator "You made me wrong!" The truth is, we compare ourselves to people and we allow other people to compare us to people but when will we breakout of this prison called comparison? Comparison is a self-guarded, inward prison. You are the jailer, and prisoner all at the same time.

God never intended for us to live a life of comparison but rather of confidence; in who we are, who he is and who we are in him. You can break out of this jail and prison of your mind! Many people have great potential but will not tap into it because they continue to view themselves through the dark, deceitful sight of comparison. 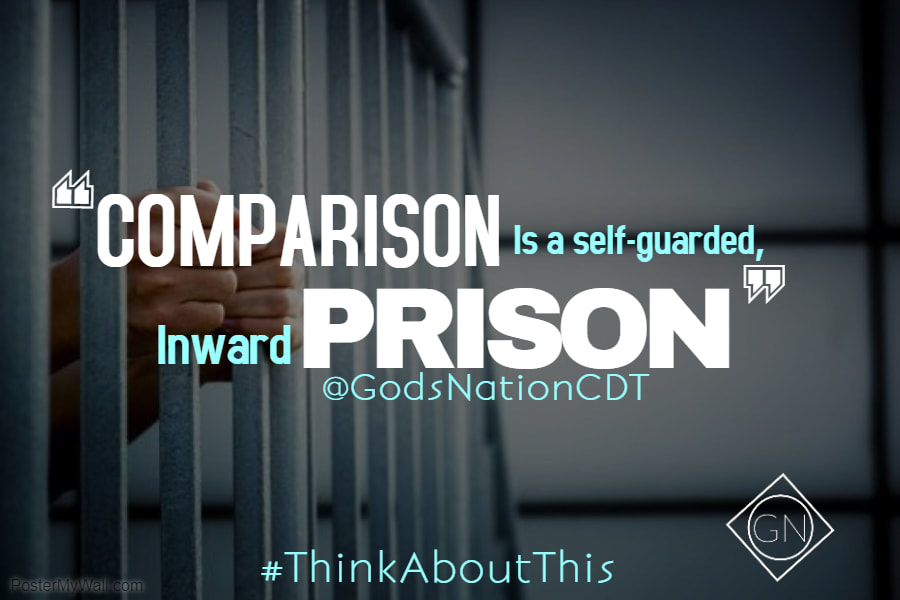